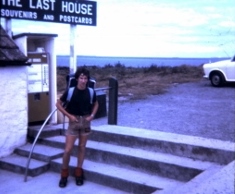 Jon at 17 on Land’s End to John O’Groats

I got addicted to long-distance walks at a very young age, working my way through several of the UK classics in my teenage years, and culminating in Land’s End to John O’Groats at the tender age of 17.

From very early on, I could see great routes just begging to be written and I’m very proud that some of the ones I created as a young lad have become classics that are still enjoyed by walkers today.

The Cassin Route on Piz Badile

By studying Adventure Education at Charlotte Mason College I was able to branch out from walking into mountaineering and, more specifically, rock climbing. This period of my life made me fully aware of the power of adventure and the potential hidden in the Lakes.

For the next 40 years I explored around every corner – from rocky gorges to holes in the ground! You’ll soon be able to download some of my findings in my new ‘Amazing Adventures’ section.

Meanwhile, you can read a bit more about my early years below.

The first long walk I did was back in the early 1960s – a midnight hike around Brighouse with hundreds of Scouts. I was 8 years old at the time and remember overtaking as many people as I could and, as I walked alone, it became a race to me and my first challenge. Shortly after this, on a Scout trip into the Yorkshire Dales to climb Penyghent, my eyes were opened. We only got halfway up and this rankled with me. We had to turn back as the group wasn’t up to it but it was that trip that fired me. Penyghent had to be climbed because it was there and because I had seen it. 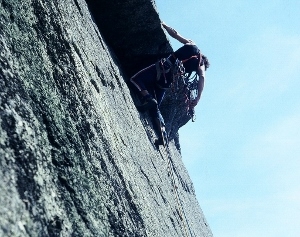 On the Springbank route on Gimmer in the Lake District

3 Peaks at 13
I returned to the Dales aged 13 with a friend of similar age and we did all the Three Peaks of Yorkshire in eleven hours. Not a fast time but we were unsupported and had travelled up by bus from Bradford in February and the snow was well over the summit wall on Penyghent. I was wearing shorts, which was a stupid move in such extreme weather, but I always wore shorts in those days! I also decided that the best route would be over the top of the Ribblehead viaduct. We didn’t think twice; it just seemed the perfect way to get to Whernside, so we did it. Fortunately, no trains were crossing it at the time!

Ingleborough was the last peak and after stumbling down we arrived at Penyghent Cafe in time to claim our badges. In those days the cafe was called the ‘Pint Pot’ and usually had dirty cavers warming themselves inside the old barn. On this occasion it was late at night and closed but a door bell on the cafe front door activated a bell inside the house. Peter Bayes opened up for us with a welcome smile. He had been waiting for us and we soon warmed up after two pints of chocolate horlicks – each! Contented, we wandered off happily down the middle of the snow-filled road back to Metcalf’s Barn and a night in the hay – halcyon days. 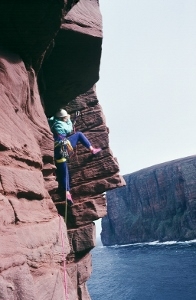 Never give in
Many trips into the Dales followed and by the time I was fourteen I had completed the Three Peaks five times. The last was the fastest time – a 7-hour circuit. Around that time I went on an Outward Bound course in Devon, which had a profound effect on me. My instructor at the time said to me, “Never give in.” I’ve heard his words resonate in my head on so many occasions throughout my life. Teaming up with a friend from Outward Bound, we completed an ambitious ‘double crossing’ of the famous Lyke Wake Walk across the North Yorkshire Moors – 84 miles in just 33 hours.

Youngest Land’s Ender
It was only natural for me to step up the mileage at 15 and complete the Cleveland Way solo – sleeping on top of Roseberry Topping. The year after, the Pennine Way was the objective and was dispatched with a friend in 11 days. So, in 1971, at the age of 17, John O’Groats to Land’s End was in my sights. Coincidentally, I was able to raise money for a new Scout headquarters in Birkenshaw. I covered what turned out to be 980 miles in 28 days, at an average of 35 miles a day, to become the youngest person to solo the journey by foot.

From that day on I have never lost my ‘spirit of adventure’ and, as an adventurer, I had a desire to guide safely in the outdoors so that others could experience what I had found… 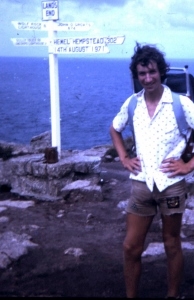 This Is A Custom Widget

This Sliding Bar can be switched on or off in theme options, and can take any widget you throw at it or even fill it with your custom HTML Code. Its perfect for grabbing the attention of your viewers. Choose between 1, 2, 3 or 4 columns, set the background color, widget divider color, activate transparency, a top border or fully disable it on desktop and mobile.

This Is A Custom Widget

This Sliding Bar can be switched on or off in theme options, and can take any widget you throw at it or even fill it with your custom HTML Code. Its perfect for grabbing the attention of your viewers. Choose between 1, 2, 3 or 4 columns, set the background color, widget divider color, activate transparency, a top border or fully disable it on desktop and mobile.
Go to Top